This was my first Hero School Suit-Up event… and I did not know what to expect, despite the pre-event buzz and anticipation. It turned out to be equally successfully and inspiring.

THE EVENT
The Hero School Suit-Up event was held at the Palms Hotel on Saturday November 9th, 2013. I hope you didn’t miss it! It was an evening to remember with so many heroes and supporters and graduates sharing food, stories and joy in the most amazing venue.

Still, I must admit I was curious how they were going to do this whole thing…

I arrived at the PALMS Casino Resort late that afternoon filled with excitement and curiosity, dressed in a dark grey suit. As a part of the Suit-Up event objective, I not only purchased my event ticket but also brought a suit as a donation so the next homeless and displaced individual graduating from Hero School could get professionally “suited” and get that job.

The PALMS Hardwood Suite left me breathless. Were we on MTV? Had I stepped onto the set of a “Fitty Cent” party??? “Must be nice to “kick it” at such a flamboyant level,” I thought. But today was not luxury and glamour. Our mission was to raise funds, awareness and support for a problem that needs urgent fixing by the ones who can. Having said that, please forgive the digression… but I can’t help but brag about the size of the suite! A basketball court! Are you fo’ real? How generous of the Palms Hotel and Casino to donate such a magnificent space. Oh snap, it comes with their head Chef, too!

The second floor of the suite hovered fashionably above like an imperial balcony. It sat “pimped-out” with a sleek pool table and a “sick” white leather couch – where partygoers could rotate a full 360-degrees at the push of a remote. Word!

I placed my bag into the luxurious second floor bedroom, the Hero Team Green Room. Though this room was “sweeeeet”, the one below dwarfed it.  A large TV screen in the bathroom sat propped above the tub. The ultra-modern dual sinks jumped out from the electric blue marble tile. You’re kidding me right? Damn! I couldn’t help but take a royal tinkle and feel like a prince.

The main room on the first floor bustled with activity: waiters and bartenders prepared the champagne; dining tables were fine-tuned to balance out and maximize the space; quick, last-minute meetings were held to make sure every volunteering hero sat poised on the same page. We implemented the last second adaptations. Thanks to the incredible PALMS team and By-DZign’s Gabriella Cote’s leadership, it was…Show time!

Beautiful, elegant guests arrived, pausing at the red carpet photo pop by photographer extraordinaire Audrey Dempsey. One could see by their facial expressions they were impressed and happy to be a part of the Hero School mission of awareness and change.

Dinner was served. No need to go into detail other than say the food was delicious and well presented.

The event really kicked off when singer, Sam Collier took the stage by storm. He sang the Hero School theme song he’d specifically composed for the cause. It’s titled, “I’ll Be Your Hero.” The opening line, “I believe in you,” communicates instant hope. It’s hard to believe in yourself when you’re invisible and have been stripped of your dignity, and self-confidence. External belief and Hero School both show that a nudge in the right direction changes lives. Did I mention that Sam’s charismatic stage presence and dynamic song had an infectious hook? He had us all standing, clapping and singing along as if at a rock concert? This was just the beginning of a wonderful night!

Midway through the event came what I think was the most important part – Why we were here! Tiger addressed that issue with his usual eloquence, conviction and prowess. He invited a couple of former homeless people onto the stage to share their story. Andrew and Nasebo were graduates of Hero School and had now found jobs, re-discovered their dignity and self-esteem to become examples of change and success. I added my two cents as the motivational speaker I’ve become. 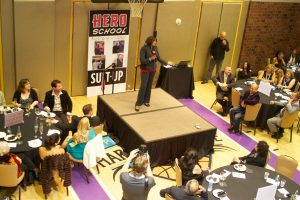 The additional fundraising portion, by means of live auction, was a hilarious and highly entertaining affair emceed by the vibrant Krista Whitley Castellarin. It completed the events mission.

In addition, Suit-Up had the honor and privilege of a celebrity guest performance by Trina Braxton, sister of mega-recording star Toni Braxton. Trina sure did deliver.

As the evening drew to a close, balloons popped, echoing sounds of celebration. The night was not yet done, however. The Palms Hotel had extended VIP passes to the Ghost Bar for all in attendance. It’s 55h floor view was simply stunning and one to savor. What happened up there I leave to your imagination in honor of Vegas’ now world famous slogan, what happens in Vegas… (fill in the blank).

Nonetheless, what happens at Hero School proudly transcends the street of Vegas baby.

I can’t wait till the next Suit-Up event. See you there.

Vital Germaine is an internationally recognized entertainer, artist and speaker. More at www.VitalGermaine.com